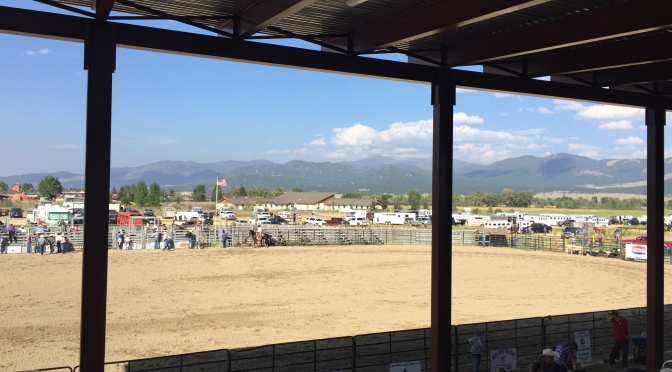 Waving bye to Washington with the satnav set for Bolder we muddled our way to Montana with the aim of watching the Jackson County Rodeo to help broaden our understanding of a bit of American culture. Rolling down the main street we were amazed how busy a small place could be. Turns out there was a classic car show and a national shooting competition going on at the same time.

So with time to spare we ventured down a bumpy track in search of the campsite, got invited to said shooting competition by a beefy looking bloke in a camouflaged buggy thing who also warned us the camp site would be busy. Driving across what we nicknamed the ‘bridge of doom’ we found his prediction correct. Unable to leave the van as it was too far to walk back we were saved by the kind people who offered to save a space for us.

Dicing with death we went back across the bridge to downtown Bolder to take a look around the car show until it was time for the Rodeo to begin. A bit later we drew into the show-ground, parked, paid & wandered in. In no time we were chatting to people before being directed into the barn for great food with live country & western music playing as we ate. Fully repleated we then strolled through another barn where I was immediately struck by the similarities to the Horticultural Show held annually in our village except here the rosettes looked way bigger & better.

Taking our seats in the small grandstand we nervously awaited the start having no real idea what to expect as all the research before hand had really only turned up the glossy shows put on for tourists and this clearly wasn’t the same.

Needn’t have worried though for as soon as our Brit accents were detected the lovely folk on either side of us took us ‘under their wings’ and filled us in on what we were watching. It made the event so much more interesting and memorable. I guess despite the many British traditions we are totally unused to the playing of the National Anthem prior to events unless a very formal occasion. So we did our best (despite feeling a tad awkward) to stand quietly & respectful while the rest of the crowd sang very patriotically.

I am sure there are as with many of these sorts of old country activities some feel they should be stopped because of potential animal welfare issues. Its a difficult one and left me with very mixed feelings as it was undeniably exhilarating but I was concerned about the methods of making the animals grumpy enough to buck the way they do.

The cowboys are clearly an odd breed of man (women it seems generally are far too sensible to get involved) who like risking all for the prestige of winning on the local level lured by the opportunity of earning large amounts of money if they prove to be good at it. It is very dangerous and one guy was hurt while we were there.  I guess as with all these things we look at it from a very different perspective now back in the olden times it was probably essential to have those skills to manage the livestock to maintain your livelihood.

The level of horsemanship was amazing views as someone who has only been on horseback a handful of times but I gather now the quad bike is a more likely steed of choice. Coming away from the event I couldn’t help smile when shuffle offered us “Cocaine Cowboys” by Margo Price. I can’t help but smile upon hearing the lyric ‘they don’t rope no cattle or ride no bulls’ as I now listen from a very different perspective jogging memories of Bolder that will stay with me for a long while.

We made it back to the free camp site which was a tranquil place once the shooting competition had finished and got a good nights kip before recalibrating the navigation to take us to Yellowstone.