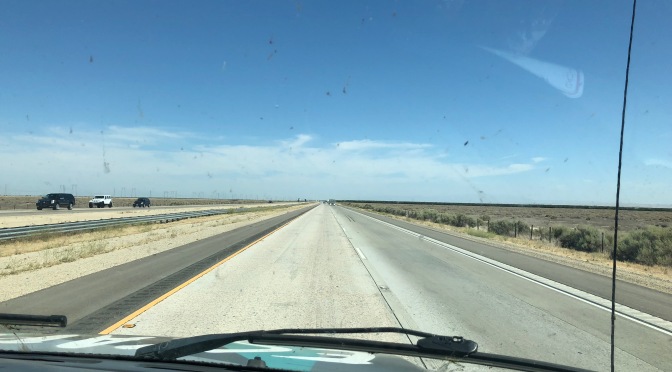 The last leg of the 3079 mile road trip involved driving from San Francisco to Los Angeles which involved a lot of driving mainly along the Highway 5.

I had planned the route using Google maps which had been calculated as 3000 miles the difference as it turned out was the unscheduled trips to the ferry terminal in San Francisco. I was duly impressed with the fact that this was incredibly accurate essential if keeping to a daily milage limit & an indication that we had not got lost en route!

Until this point we had many avoided the main roads preferring the more scenic routes but time & distance dictated the need to use the most direct means of returning to the camper & getting the flight home.

My daughter drove the first part leaving me to take over and navigate the intense traffic in LA. While she was at the wheel it allowed me to watch the world go by & mull over whether I had learned anything on our sojourn.

As it happened quite a lot of things had crossed my mind as we had roamed around. I had come to the conclusion that whilst it was fun to hang out with those much younger than me. However whilst it was immensely flattering when a young guy at the festival started dancing with me having told me he ‘loved my dance moves’ it merely reaffirmed my desire to remain young at heart not turn the clock back.

I admit to being a little taken aback at my new capacity to scrutinise some long held beliefs & revise my view point of view. It requires a degree of strength to tap into your inner self, hold your hands up & then admit to yourself that you may have been wrong or misguided. This is however a very liberating experience perhaps should be something that wider society would do well to embrace from time to time?

Personally I found the less judgemental approach of the ‘Millennials’ to be refreshing. Especially as facing impending early retirement I was finding the prospect of being ghettoised into the role of ‘pensioner’ or ‘senior’ or indeed any other of such similar terms to be deeply troubling. However it was on the second road trip of 2018 that the kernel of the idea to set up this blog started to formulate.

With a weekend in LA we made the most of it by going on a bus tour to see some of the key sights and then caught up with my daughters charming friend who being a native was able to take us to places that probably were not on the normal tourist route. I discovered Malbec and a whiz up in the air to watch the sun go down from the tallest structure.

We walked for miles along the promenade from Muscle Beach to the pier and shopping precinct of Santa Monica. Stuffing ourselves with an In & Out Burger after poking around the canals of Venice before heading to the heart of the city for a quick trip on the shortest commercial railway followed by wine in an intimate hidden watering hole.

We joined our host the following day for afternoon tea where there were over 80 different teas to pick from in a cute tea shop before heading across to Las Vegas.