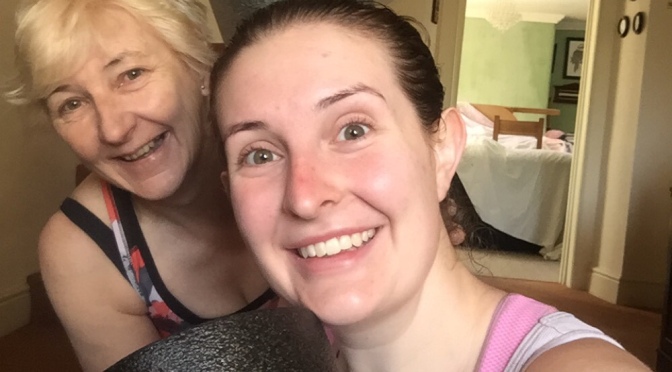 When we slipped back into the UK it was evident that life was entering strange times especially as my daughter was soon gripped by in-depth spring cleaning. On discovering a long abandoned 30 day shred dvd lurking at the back of her wardrobe we decided to give it a go given our normal classes were going to be off limits.

With Lockdown now in full swing & were nearing the ‘shred end’ we had become incentivised by the definite changes that were taking place. So on discovering our exercise guru now had an app we signed up immediately. Having decreased 1 cm over all the key measurements I was keen to capitalise on the progress. I may not quite have gained the sculpted look of Jill’s ‘best girl Nat’ from the dvd but for the first time ever I was starting see discernible abdominal muscles!

So tantalisingly promised ‘buns of steel & washboard abs’ we find ourselves now 12 days into ‘bangin bikini body’ & the outcome may prove akin to a modern miracle in my case if the promise comes true. Though maybe stealing a pecan slice to go with my post exercise coffee & sit down might make it slightly less deliverable.

Following the regime daughters on app means that Jill gives us exercises based on her considerably younger profile rather than mine so its somewhat of a triumph that I am sat writing this at all. I discovered the difference between the workout regimes whilst sipping wine on a beanbag watching mine run through to keep the days in synch. After all that effort I am not missing out on the credit & virtual badge.

Foam rollering can be a tad painful but necessary especially as I am not able to have my regular sports massage at the moment. I started to invest in these as a means of helping me avoid injury & bringing back flexibility.

On a rare sortie to the supermarket my daughter was able to purchase two firmer, & slightly textured 14cm rollers which a are a little easier to use than the 33cm we already had. Sadly not so much luck finding heavier hand weights, who knew that these items would be rarer than hens teeth in the thralls of a pandemic.

I have harboured the suspicion that there are a few who still consider older women incapable of participating in strenuous exercise let alone a martial art. Revelation of attendance at the annual summer camp is usually met with some degree of surprise mixed with incredulity.

So the prospect it will not run this year brings a tinge of sadness & the likelihood I will not be attempting the timed run to the beach. I recall the first camp & my horror at the prospect of even walking up the hill at the start. Shamed by the fact the team had to go at the pace of the slowest I made a pact with myself to improve. After struggling at the next couple of camps I was assigned to a team where one member who’s ‘day job’ was that of a personal trainer. Gasping out my plan as we approached the hill she started to coach me. Indeed over the week she totally transformed my mental approach & running style. Right up to the day of the timed race I was uncertain whether to participate but in one moment of madness I felt my hand go up when they asked who was running.

I think I genuinely shocked some & whilst I harboured no illusions of winning I dearly did not want to be the last. Perseverance over the years finally paid off as I was the third lady over the line last year & given the first was at least 25 years my junior it remains a personal triumph. All of which I was reminded of by Jill Michaels who points at Nat’s stunning torso & says ‘You want to look like this? You got to work for it!’ & how true that is for exercise as well as other aspects of life.

Which leads me to reflect on my approach to learning to play the guitar. I embarked on this a couple of years ago when thinking I would have time to fill during early retirement. Trying to play everyday if only for a few minutes & it does seem to help improve cognitive function & dexterity as well as a means of escape especially now when the ‘mental claustrophobia’ of lockdown starts to bite. I love to travel & should have been on an adventure as I write but this obviously was cancelled leaving me channelling my energy else where. So have been attempting to write music & lyrics but it remains to be seen whether these will ever be let loose on an unsuspecting audience any time soon. Still it has served to increase my love & understanding of musical technique if nothing else. Who knows maybe I will find the courage to at least post the lyrics at some point.

So until next time I bid you adieu & hope you stay safe.