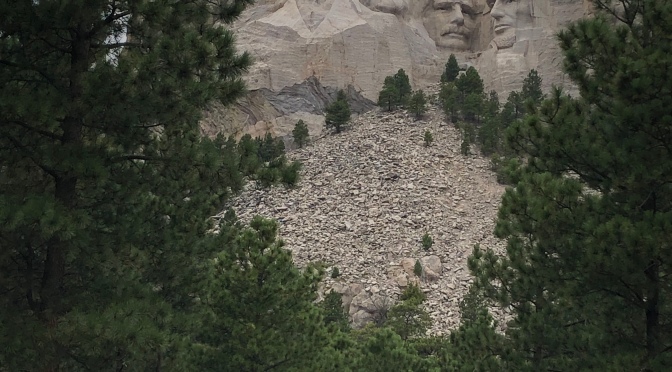 I had seen images of the faces carved into the cliffs many times in the past via many mediums but there is something quite awe inspiring seeing these as up close & personal as you can from the viewing gallery.

The tenacity & vision employed to create these images was immense given the difficulty carving the likenesses on such a scale given the technology of the time would have been surely tested to its extreme.

However this impressive feat has to be tempered with the fact that it was in part to celebrate key forefathers of relatively modern American history & to increase tourism to the area. It undoubtedly has fulfilled the creators intention of becoming a centre of information & draws thousands of visitors a year however for me there was just the niggling feeling that this only presented one version of the story.

When one travels & pokes about in the murky corners of a countries history particularly when so intricately linked with ones own does it seem to serve up some quite difficult issues to ponder on. Transpires that the sites history has quite a shady side given that it was once part of sacred lands of the Laokata people whose history had been almost obliterated. We had already dipped our curiosity into this subject by conversing with the descendants of Wounded Knee to discover a very different perspective of past events. I had experienced similar notions when in Australia & New Zealand for many of the same reasons & some aspects of this perplex me still.

Having explored the site & resisted ice cream we ventured into the town in search of a campsite & found one which we settled on as it was late in the day. Our neighbours were chatty & we spent a peaceful night despite being near the main street before setting off early the next day to Custer Park.

This had not been on the original schedule but we had gained some time & decided to invest it trying to spot unusual animals. Having located the visitor centre we were given the heads up on the potential location of bison & other wildlife so definitely a good place to start the day.

We set off & were not disappointed as we spied these magnificent beasts & then having turned back on ourselves slightly took a less metalled road to catch a glimpse of the prairie dogs at play.

They reminded me of the ‘whack a mole’ game as they popped in & out of their holes squeaking & challenging one to guess where they would resurface. It was quite difficult capturing them as they seem to pop up & down quickly emitting a high pitched squeak as they did!

A tad disappointed not to visit the narrower sections of the Park for fear of Marthas ample proportions rendering us stuck we headed for a campsite but not before taking a short hike up a hill by what turned out to be a manmade lake.

Our native spirit guide had its work cut out but seemed to adept at finding us a place to park each night at the most unlikely places & sometimes despite the ‘full’ sign.

Beers in the sunshine while wild turkeys wondered by followed by a sumptuous meal in the local restaurant meant a fairly good night sleep before we were up & on the road.

We were headed to the Crazy Horse Memorial museum to sort of provide some balance to the Mount Rushmore visit. This project too is impressive given the scale & intricacy of the sculpture that is being hewn into the rock face.

Leaving all the history & politics aside for a moment you can’ t help but marvel at what can be achieved with vision & determination in either case. The Crazy Horse project is by no means complete & has spanned multiple generations continues to challenge those involved. The centre is interesting containing as it does a degree of information about the various tribes & what has been retained of their culture.