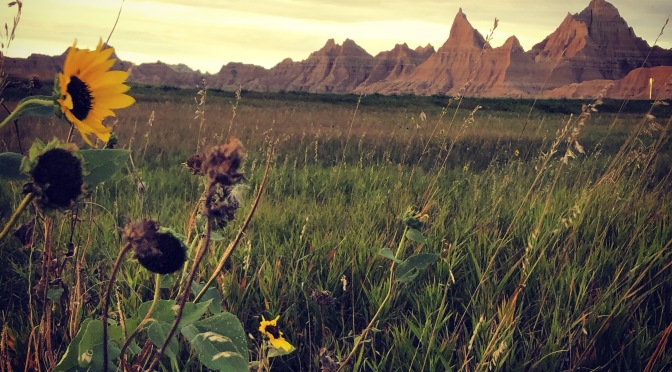 I will confess to have not really known much about the Badlands South Dakota before we found ourselves bound for them so really didn’t know what to expect. One assumes from the name it will be a strange sort of place but it is truly difficult to describe the strange topographical landscape that befalls you.

Once can only marvel of how this land must have appeared to those hardy travellers of yesterday who ventured that way without the benefit of knowledge about the inherent dangers of the place. Likewise it is almost unsurprising that the Native American Indians treated the place with caution & respect.

So it was then we found ourselves at the gateway to this National Park ready to circumnavigate the scenic drive in Martha when a warning light appeared on the dash. We had no option but to push forward as garages are a little on the sparse side but with our tendency to travel circular routes anticlockwise we found a service station.

We espied a chap who looked like he may posses a modicum of mechanical knowledge & more importantly a tyre pressure gauge. Thankfully the pressures were fine & the warning light perhaps just a faulty switch. Bidding our ‘knight in jeans & a sweat shirt’ goodbye with many thanks we filled up & returned to our quest.

By the time we reached the furthest point the rest of the world was just getting going so we were able to glide in & out of the various view points with relative ease. At one stop we ventured on one of the short trails & it became evident how easy it would be to become completely disorientated in this strange pot holed place.

One false footstep could mean you slipping into a crevice that escape from would have been challenging to say the least. We had water bottles & a sturdy means of transport but to imagine the traverse of such a place on foot without seems impossible. The day was overcast but normally the climate could potentially mean searing hot clear days & there was precious little in the way of shelter.

We completed the loop & headed for our next destination Mount Rushmore & the impressive mountainside carvings.