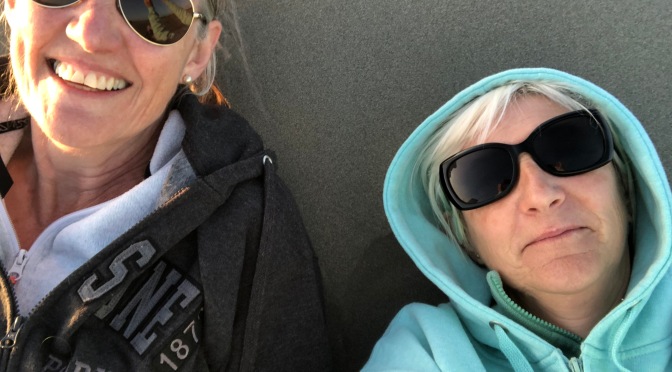 Top travelling tip always check out any national holidays that might take place when you are visiting a country to assess the impact on your journey! Labor Day is an important date on the calendar that sadly we did not factor in when heading towards Californian coast. Blissfully unaware of how busy the towns along the 101 would be & it was a shock to find that all the Rv parks we had assumed would have spaces for us were full to capacity. Googling like crazy we revised the route as we went to try and identify a potential place to stay overnight.

The miles rolled by & it became a bit tricky to concentrate on the amazing scenery for fear we would not find a suitable spot. Darkness slowly drawing in as we tentatively headed down towards Devils Lake the hopes of an overnight stop was dwindling as fast as the light.

As our tired, strained eyes searched the road ahead an incredibly bright yellow board announcing the presence of a KOA site was wondrous sight. Gleefully shouting in the van the phrase ‘you’re never far away from a  KOA’ we pulled in.

The kind people running the site listened to our pleas & found us a spot for the night. Waking at first light found that clearly we were not the last to seek refuge. For as I opened the door I was greeted by a lady peering up at me from under the duvet that she was snuggled under  in the passenger seat of the truck now beside us.

An interesting conversation about the duplicitous nature of politicians on both sides of ‘the pond’ was had before we wished one another a  good day & set about having breakfast.

Trundling up the coast we were treated to a number of wild & beautiful sights but we were on a mission to get to Astoria before dark so we could cross the amazing bridge that spans the mighty mouth of the Columbia River. It was on completion in 1966 the longest continuous truss bridge in the world & provided the ‘missing link’ in the USA highway system between Mexico & Canada. It was my turn to drive so I got the honour of taking Bertha across which was quite a thrill. Followers may have spotted my buddies liking for silo photos so not wanting to be left I have included pictures of the assorted bridges we traversed. You have been spared the video of the crossing as I was driving & my mates camera battery died so only the stills survived.

Back once more in Washington State we headed for a state Park campsite which was a beautiful location beside the sea.